Be it innovative Li-Fi (light fidelity) technology based on light waves, online shops with AR functionality, convenient cleanroom hood systems or safe and secure ‘Emergency and Danger Response Systems’, on 19 and 20 November 2019 the Cleanzone trade fair will be looking into the future of contamination control. 80 companies will be showcasing solutions that make the manufacture of high-tech products safer, more reliable and more efficient. Eight nominees for the Cleanzone Award 2019 will be presenting pioneering innovations.

Europe’s cleanroom experts will be coming together once again for the eighth Cleanzone – international trade fair for contamination control and cleanroom technology – on 19 and 20 November in Frankfurt am Main. 80 exhibitors from 13 countries (2018: 78 exhibitors from twelve countries), 30 percent of whom come from outside Germany, will be presenting their products and services at the trade fair. In addition to Great Britain and Switzerland, Eastern Europe is particularly well represented with companies from Slovenia and the Czech Republic. There are also companies from France, Spain, Austria, Ireland, the Netherlands, Belgium, Turkey and Korea exhibiting at the fair.

Wolfgang Marzin, President and Chief Executive Officer of Messe Frankfurt: “Cleanzone is once again underscoring its role as the leading international trade fair for contamination control and cleanroom technology in Europe. It is the place to go for all high-tech industries that require controlled and clean environments for their production.”

Highlights at Cleanzone
Pioneering innovations are the name of the game at the Cleanzone Award (www.cleanzone.messefrankfurt.com/award), which is being presented by Messe Frankfurt in cooperation with the publisher Wiley-Verlag and its ReinRaumTechnik trade journal for the first time this year. Submissions from this year’s nominees include new products based on innovative technologies such as Li-Fi technology and augmented reality. With Li-Fi (light fidelity) technology, information is transmitted via light waves sent by LEDs. One thing that all the innovations have in common is that they make production under controlled conditions simpler, more efficient, safer and more reliable – while also protecting personnel and delivering greater convenience.

Space exploration has played a pioneering role in modern cleanroom technology, and Cleanzone is once again featuring this theme in 2019. In her keynote lecture entitled ‘The fascination of space – women’s power between atmosphere and orbit’, Dr. Claudia Kessler, founder of the start-up ‘Die Astronautin gGmbH’, discusses the project that aims to send Germany’s first female astronaut into space. This keynote presentation is part of Messe Frankfurt continuation of the ‘Ladies@Cleanzone’ format launched in 2018, which aims to strengthen the importance of women in technological fields such as cleanroom technology.

Formnext, the international flagship event for additive manufacturing, is taking place alongside Cleanzone from 19 to 22 November. Visitors to the Cleanzone trade fair can visit Formnext free of charge by presenting their Cleanzone tickets at the entrance to Formnext, where they will be given an admission voucher to the fair. 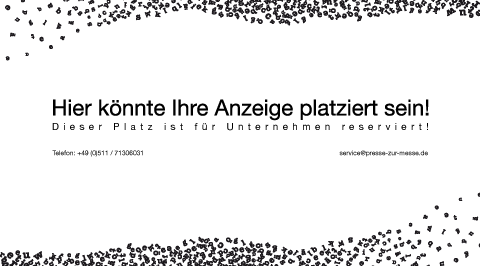